A Guide to Virunga National Park in Congo

Virunga National Park is a national park in the Albertine Rift Valley in the eastern part of the Democratic Republic of the Congo. It was created in 1925 and is among the first protected areas in Africa. In elevation, it ranges from 680 m (2,230 ft) in the Semliki River valley to 5,109 m (16,762 ft) in the Rwenzori Mountains. From north to south it extends about 300 km (190 mi), largely along the international borders with Uganda and Rwanda in the east. It covers an area of 8,090 km2 (3,120 sq mi) and is listed in the List of World Heritage in Danger since 1994.

Two active volcanoes are located in the park, Mount Nyiragongo and Nyamuragira. They have significantly shaped the national park’s diverse habitats and wildlife. More than 3,000 faunal and floral species have been recorded, of which more than 300 are endemic to the Albertine Rift including the eastern gorilla (Gorilla beringei) and golden monkey (Cercopithecus kandti).

There have been several deadly attacks in the park by rebel groups, and several park rangers have been killed.

In the early 1920s, several proponents of the European conservation movement championed the idea of creating a protected area in northeastern Belgian Congo, among them Victor van Straelen, Jean Massart and Jean-Marie Derscheid. When Albert National Park was established in April 1925 as Africa’s first national park, it was conceived as a science-oriented nature reserve with the aim of studying and preserving wildlife and so-called ‘primitive’ hunter-gatherer African Pygmies. In 1926, Derscheid headed the first Belgian mission to cartograph Albert National Park, which encompassed an area of 500 km2 (190 sq mi) around the extinct volcanoes Mount Karisimbi and Mount Mikeno. The protected area was extended in 1929 by Virunga National Park, which encompassed the Virunga Mountains, parts of the Rutshuru Territory and the plains south of Lake Edward. Its initial size of 2,920.98 km2 (1,127.80 sq mi) was enlarged step by step in subsequent years. Indigenous people lost their traditional land rights in this process, and were evicted from the protected area. Between the late 1930s and 1955, an estimated 85,000 Rwandophone people were moved to nearby Masisi in North Kivu. 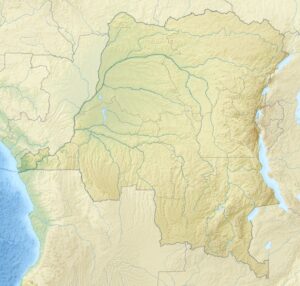 In 1934, the Institut des Parcs Nationaux du Congo Belge was founded as the governing body for national parks in the Belgian Congo.[10] Between the early 1930s and 1961, several expeditions to Albert National Park were carried out by Belgian scientists, the second headed by Gaston-François de Witte. They studied and collected zoological specimens of wildlife for the Musée Royal d’Histoire Naturelle de Belgique; explored the ethnic groups in this area;[18] studied volcanic activity,and fossils.

In the late 1950s, encroaching Tutsi herders and their cattle destroyed natural habitat inside the park up to an altitude of 3,000 m (9,800 ft), threatening the food base of the park’s gorillas.

Land laws were reformed in the 1960s after Belgian Congo became independent as the Republic of the Congo, and the land declared property of the state, much to the disadvantage of local people. Illegal hunting inside protected areas increased.[14] In 1969, the two parks were merged under the name Virunga National Park, which was declared a UNESCO World Heritage Site in 1979.

Since the early 1990s, the protected area was impacted by political turmoil in the African Great Lakes region. Following the Rwandan genocide, thousands of refugees fled to the Kivu region, and the presence of military increased. The First and Second Congo Wars further destabilised the region. Anti-poaching patrols inside the park were obstructed, and park personnel and wildlife were killed. About 850,000 refugees lived around the national park in 1994. Up to 40,000 people entered the park daily in search of firewood and food, and deforested huge areas.[22] In 1994, Virunga National Park was entered into the List of World Heritage in Danger. In 1996, the national park was enlisted as a Ramsar site of international importance.

In 2005, the European Commission (EC) recommended a public-private partnership between the country’s government and the British non-governmental organisation African Conservation Fund. The latter organisation is responsible for park management since 2010; about 80% of management costs are subsidised by the EC. Park protection efforts were militarised in the following years to deter armed rebel groups and poachers from operating inside the park.

In 2011, the British company Soco International was granted a concession for extracting crude oil in the surroundings of and in large parts of the national park. Government officials supported exploration activities by Soco International mission members, whereas park management opposed. In the course of increasing tensions, the park’s chief warden, Emmanuel de Mérode, was assailed in April 2014. Following international protests, the company stopped exploring activities and consented to refrain from starting similar operations in the vicinity of World Heritage sites.

By 2016, four hydropower dams were constructed that provide electricity to small businesses and benefit more than 200,000 rural people.