The Bwindi Impenetrable National Park (BINP) is in southwestern Uganda. The park is part of the Bwindi Impenetrable Forest and is situated along with the Democratic Republic of the Congo (DRC) border next to the Virunga National Park and on the edge of the Albertine Rift. Composed of 321 square kilometers (124 sq mi) of both montane and lowland forest, it is accessible only on foot. BINP is a United Nations Educational, Scientific, and Cultural Organization-designated World Heritage Site.

Species diversity is a feature of the park. It provides a habitat for 120 species of mammals, 348 species of birds, 220 species of butterflies, 27 species of frogs, chameleons, geckos, and many endangered species. Floristically, the park is among the most diverse forests in East Africa, with more than 1,000 flowering plant species, including 163 species of trees and 104 species of ferns. The northern (low elevation) sector has many species of Guinea-Congolian flora, including two endangered species, the brown mahogany and Brazzeia long pedicellate. In particular, the area shares in the high levels of endemisms of the Albertine Rift.

The park is a sanctuary for colobus monkeys, chimpanzees, and many birds such as hornbills and turacos. It is most notable for the 400 Bwindi gorillas, half of the world’s population of endangered mountain gorillas. 14 habituated mountain gorilla groups are open to tourism in four different sectors of Buhoma, Ruhijja, Rushaga, and the Nkuringo in the Districts of Kanungu, Kabale, and Kisoro respectively all under the management of Uganda Wildlife Authority.

These reserves had a combined area of 207 square kilometres (80 sq mi). In 1942, the two reserves were combined and enlarged, then renamed the Impenetrable Central Crown Forest. This new protected area covered 298 square kilometres (115 sq mi) and was under the joint control of the Ugandan government’s game and forest departments. 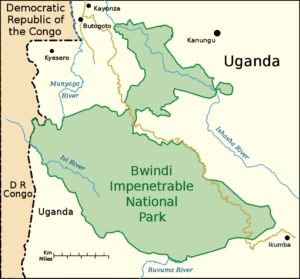 In 1964, the reserve was designated as an animal sanctuary to provide extra protection for its mountain gorillas and renamed the Impenetrable Central Forest Reserve. In 1966, two other forest reserves became part of the main reserve, increasing its area to almost 321 square kilometres (124 sq mi). The park continued to be managed as both a game sanctuary and forest reserve.

In 1991, the Impenetrable Central Forest Reserve, along with the Mgahinga Gorilla Reserve and the Rwenzori Mountains Reserve, was designated as a national park and renamed the Bwindi Impenetrable National Park.

It covered an area of 330.8 square kilometres (127.7 sq mi). The national park was declared in part to protect a range of species within it, most notably the mountain gorilla. The reclassification of the park had a large impact on the Batwa pygmy people, who were evicted from the forest and no longer permitted to enter the park or access its resources.

Gorilla tracking became a tourist activity in April 1993, and the park became a popular tourist destination. In 1994, a 10-square-kilometre (3.9 sq mi) area was incorporated into the park and it was inscribed on the World Heritage List. The park’s management changed: Uganda National Parks, since renamed the Uganda Wildlife Authority, became responsible for the park. In 2003 a piece of land next to the park with an area of 4.2 square kilometres (1.6 sq mi) was purchased and incorporated into the park.

In March 1999, a force of 100–150 former Rwandan Interahamwe guerrillas infiltrated across the border from the DRC and kidnapped 14 foreign tourists and their Ugandan guide from the park headquarters, eventually releasing six and murdering the remaining eight with machetes and clubs. Several victims were reportedly tortured, and at least one of the female victims was raped.

The Ugandan guide was doused with gasoline and lit on fire. The Interahamwe attack was reportedly intended to “destabilize Uganda” and frighten away tourist traffic from the park, depriving the Ugandan government of income. The park was forced to close for several months, and the popularity of the gorilla tours suffered badly for several years, though attendance has since [when?] recovered due to greater stability in the area. An armed guard also now accompanies every tour group.

The Gorilla highlands experience is a collection of activities that include canoe trekking, island hopping, community visits, forest walks, and homestays. These activities are preceded by visits to the Bakiga museum located at Edirisa studio in the heart of Kabale town. Here is the animated history and culture of the Bakiga people who have been energetic farmers through generations. Learn More

How much is a gorilla trekking permit in Uganda – The Gorilla trekking permit now costs $700 for foreign nonresidents, $600 for foreign residents of East African countries (Uganda, Rwanda, Kenya, Tanzania), and 250,000 UGX for East African citizens through the year. There are no low season discounts anymore or any other discounts so do not be deceived or misled. Learn More

When planning your safari vacation, one of the first questions you may have is what is the best time to visit Bwindi for trekking? especially if you plan to see the famed mountain gorillas of Bwindi Impenetrable National Park. As the tour consultant at Kabira Gorilla Safaris, we authentically in our opinion say that you can visit Bwindi Impenetrable National Park at any time of the year. Learn More

Rushaga sector is well known for sheltering the highest numbers of habituated mountain gorilla families that are available for trekking. The Rushaga gorilla sector habituates five gorilla groups which guarantee travelers great chances of accessing the permits except for other gorilla sectors. Learn More

Request a Quote
× Talk to An Expert