The Nyungwe Forest National Park is located in southwestern Rwanda, on the border with Burundi, where it is contiguous with the Kibira National Park to the south, and Lake Kivu and the Democratic Republic of the Congo to the west. The Nyungwe rainforest is probably the best preserved montane rainforest in Central Africa. It is located in the watershed between the basin of the river Congo to the west and the basin of the river Nile to the east. From the east side of the Nyungwe forest comes also one of the branches of the Nile sources.

Nyungwe Forest National Park was established in 2004 and covers an area of approximately 970 km2 of rainforest, bamboo, grassland, swamps, and bogs. The nearest town is Cyangugu, 54 km to the west. Mount Bigugu is located within the park borders. 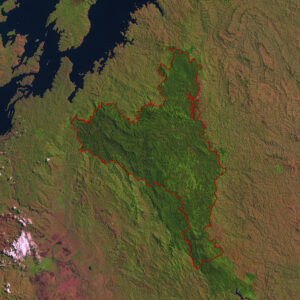 The Nyungwe forest National Park has a wide diversity of animal species, making it a priority for conservation in Africa. The forest is situated in a region in which several large-scale biogeographical zones meet and the variety of terrestrial biomes provides a great span of microhabitats for many different species of plants and animals.

The park contains 13 primate species (25% of Africa’s total), 275 bird species, 1068 plant species, 85 mammal species, 32 amphibian and 38 reptile species. Many of these animals are restricted-range species that are only found in the Albertine Rift montane forests ecoregion in Africa. In fact, the number of endemic species found here is greater than in any other forest in the Albertine Rift Mountains that has been surveyed. The forest, which reaches its maximum altitude of 3000 meters above sea level, is of particular interest for the presence of colonies of chimpanzees (Pan troglodytes) and Angola colobus (Colobus angolensis), the latter now extinct in Angola for the intense hunt to which they were subjected.